How ‘Make do and Mend’ defined wartime style 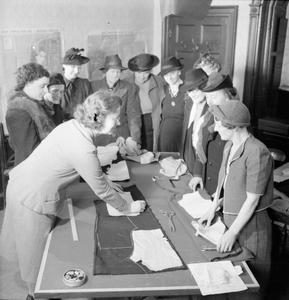 Above – Make Do and mend Sewing Classes, London 1943. A group of housewives gather round Miss Clifford, a London County Council instructress, as she shows them how to cut out material using a paper pattern. They are in the office of the Kennington branch of the Labour Party, which they borrow two afternoons a week. The fee for these classes is 1/- Shilling a term and includes Keep Fit and First Aid instruction. 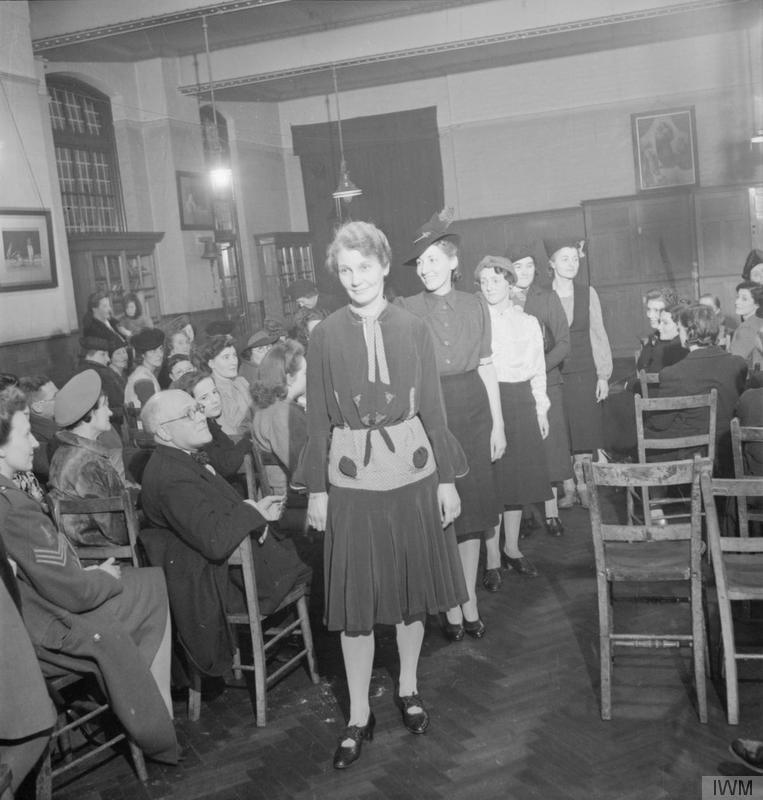 Above – Pupils of a London County Council dressmaking class hold a fashion parade to show their friends and family what they have learnt. In the foreground is Mrs Johnson, who is wearing the blue frock she was married in 20 years previously in 1923. The dress has been completely remodeled with pink and white silk. Behind her, Mrs Hill is wearing a skirt she has made from a pair of postman’s trousers. Third in line is Mrs Bolton, from the Kennington class. 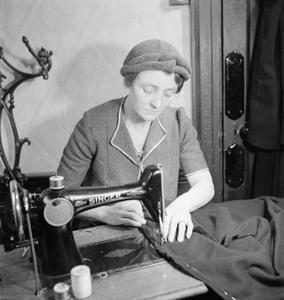 Above – Mrs Bolton at work on a sewing machine during a Make Do and Mend class in the office of the Kennington branch of the Labour Party. She is making a coat for her 16 year old daughter on the sewing machine that she has bought to the class as part of the ‘Equipment Pool’, to which all members of the class contribute. 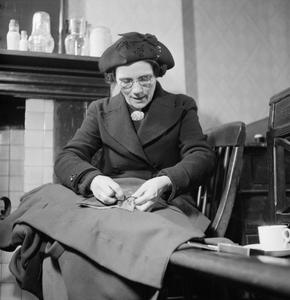 Above – Mrs K Holmes make a coat for one of her three children at the Make Do and Mend class she is attending. This class is held in the office of the Kennington branch of the Labour Party. She appears to be sewing a pocket on by hand. 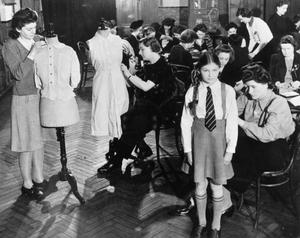 Above – Pupils of a London County Council dressmaking class hold a fashion parade to show their friends and family what they have learnt. In the foreground is Mrs Johnson, who is wearing the blue frock she was married in 20 years ago. The dress has been completely remodelled with pink and white silk. Behind her, Mrs Hill is wearing a skirt she has made from a pair of postman’s trousers. Third in line is Mrs Bolton, from the Kennington class.

It was a time to make do and mend by transforming an old chenille bedspread into a truly startling new coat, put on a brave face by applying beetroot juice as lipstick, and put a best foot forward treated with Moondusk Cyclax fake stocking cream, complete with paint on false seam, advertised as “bare leg freedom with the beauty of sheer hose”.

We celebrate the ingenuity, determination, and sometimes plain battiness of the attempts by the stylish to get around rationing, clothes coupons and shortages of everything from knicker elastic to buttons.

The government issued regular bracing suggestions, including cheerful pamphlets on how to darn and patch by Mrs Sew and Sew. Propaganda films included instructions on how to chop up and remodel a man’s felt hat, ending with the unconvincing assurance “when he sees your new sports hat, he certainly won’t regret his old trilby”.

The surprise, in archive photographs and films, and original clothes from the period, is how good many people looked. Designers including Hardy Amies became involved, and Winston Churchill’s much copied one-piece siren suits were immaculately made by tailors Turnbull and Asser. 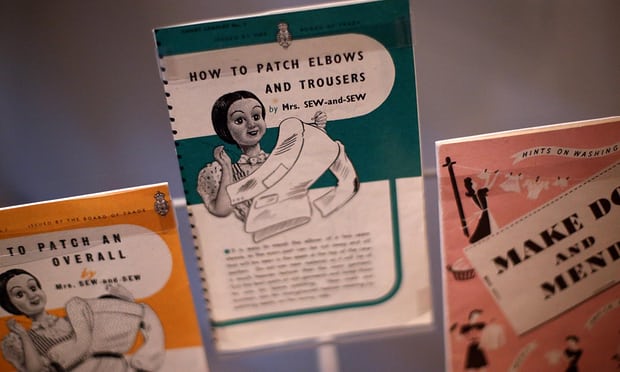 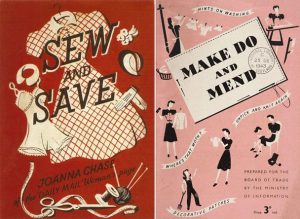 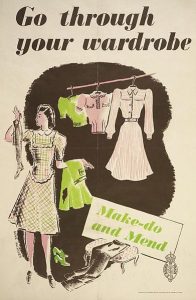 People now think that ‘utility clothing’ meant cheap and nasty – but in fact the reverse is true, they were actually extremely well made because they were expected to last and last, which is why so many that have survived are still in such good condition.

The restrictions, the narrow elegant cut, the simplicity of line, the absence of frills and trimmings, means that the clothes look remarkably stylish today – much more so than those before or immediately after the war.

The rules were strict: no more than five buttons and two pockets, two pleats, no trouser turn-ups for the men, and braces not elasticated belts – any spare elastic went for women’s underwear. Trousers for women changed from beach to town wear, with one ad boasting “for the home front but with a military touch” showing a woman in a pinstripe suit vaulting over a five bar gate.

People were ingenious at finding sources of unrationed materials. This supremely stylish underwear made for Pamela Mountbatten out of a navigation map printed on silk given to her by an RAF boyfriend. 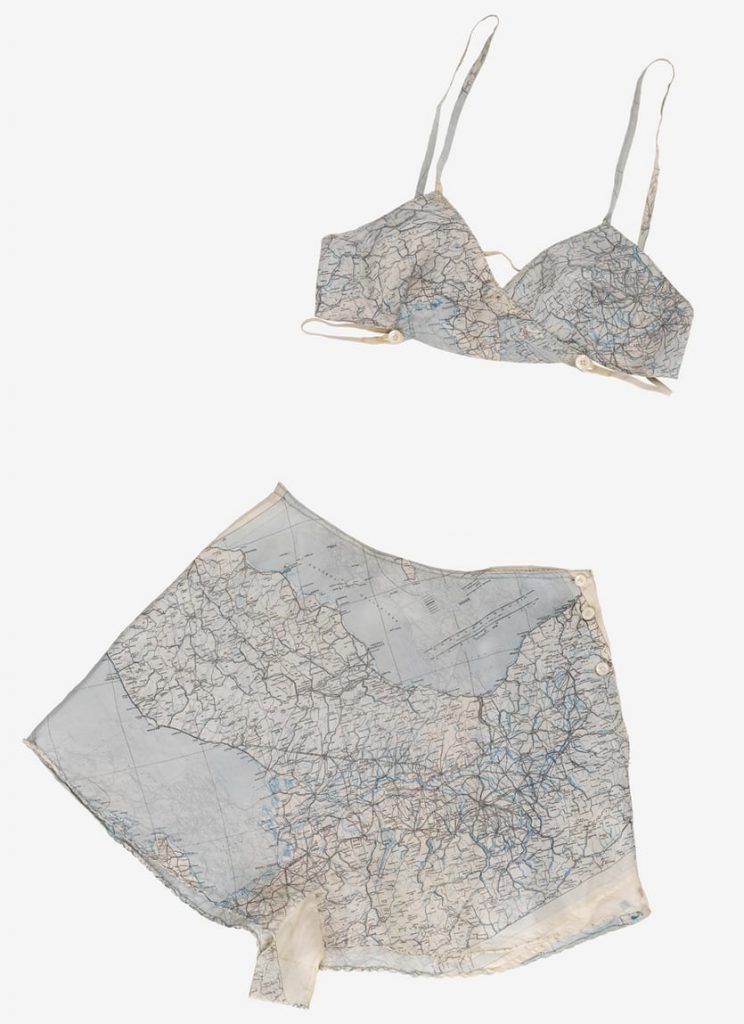 Although everyone was subject to rationing and coupons, some did much better than others: Vogue offered tips on cutting down a dinner gown into a smart black silk day dress, which wasn’t much help if you didn’t have a black silk dinner gown to start with.

If you were well off, and started the war with a fabulous extensive wardrobe of clothes, obviously you would have looked much better. In the earliest days there was strong disapproval of any kind of ostentation, but by the end it was regarded as a patriotic duty to be seen to make an effort and look your best.

Many chose to marry in uniform, but one wedding dress, made from a length of pre-war lingerie silk, was worn by the bride it was made for, and later borrowed by 15 other women. 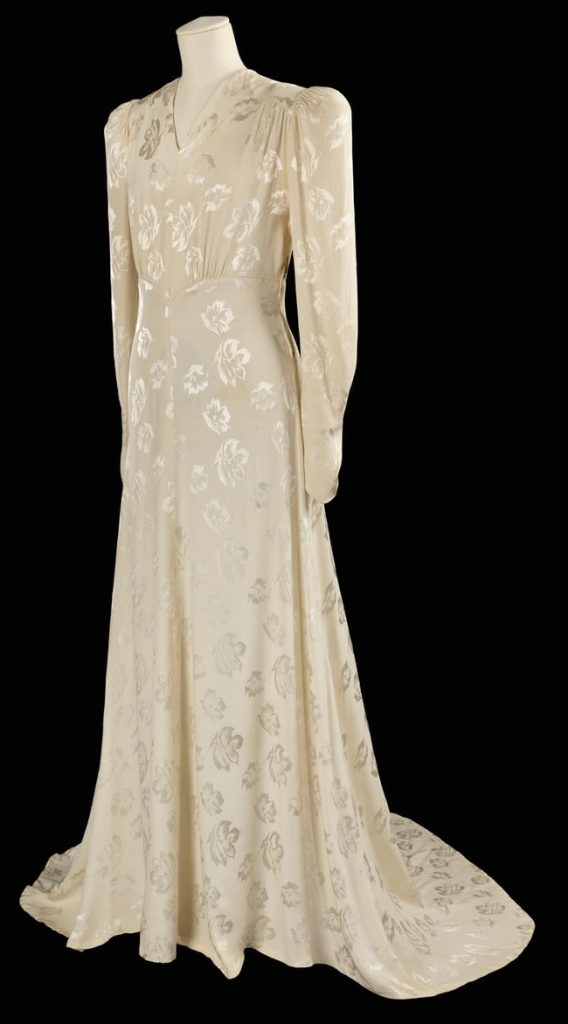 Conserving fabric was vital, this wedding dress was worn by 15 different women