All About Our 1940s Printed Fabrics

All About Our 1940s Printed Fabrics

During the 1940s, you will find popular prints include many varieties that were also commonly found within other decades of vintage inspired fashion. Here at The Vintage Pattern Shop, we are able to provide you with a wide variety of printed fabrics from the 1940s. Today we’re going to look at five key printed fabric types, including polka dots, plaid, stripes, checks and florals.

Polka dots are the go-to print when wanting to create a vintage-inspired outfit, remaining extremely popular from the 1920s right through until the 1960s. Although available in a choice of different sizes, the most popular dots were on the smaller side during the 1940s. During the summer you would see coloured dots on a white background, and then the reverse was also a common year-round option.

Plaid was also considered a print for wear all year round, though it was most popular in winter. From students, to mothers, you would likely see the print everywhere you went. Plaid skirts, pinafore dresses and jumpers were popular with teenagers and young women, with the cotton day dress made into a variety of styles. The print moved with the seasons, with a darker colour palette for winter and autumn, and a lighter pastel palette for spring and summer.

Vertical stripes were in fashion during the 1940s, again with the stripes themselves being small and narrow, though not as thin as pinstripes. Following suit from polka dots, you would normally find one colour in a white background, with popular colours including blue, red brown, green, pink, and yellow. During the second half of the decade, these stripes were also merged with florals and other motifs threaded through like vines, or otherwise including rainbows of different colours rather than just one coloured stripe.

When it comes to chequered prints, these again tended to be on the smaller side during the 1940s. Cheques were very small and became known as gingham, normally woven from a medium-weight balanced fabric of cotton or cotton-blend yarn. They were common in both summer and winter, and a popular choice to be worn with women’s suits and overcoats.

Again, keeping the prints small, floral patterns would consist of small flowers usually (large flowers weren’t in vogue until around the 1950s). Floral prints in the 1940s were not made to be realistic, but rather as if made by an artist’s brush, differing from those from alternative decades either before or after. These paint-brushed designs could be considered as iconic when it comes to vintage pattern prints from the 1940s. 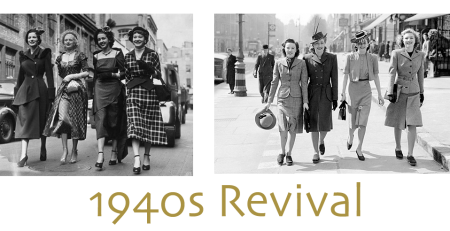 As with every era, the 1940s featured a particular silhouette that women could create through their clothing. During this... read more

The huge selections of 1940s sewing patterns that are available are an enjoyable thing to collect and own.  In... read more